My Husband Almost Missed Our Wedding 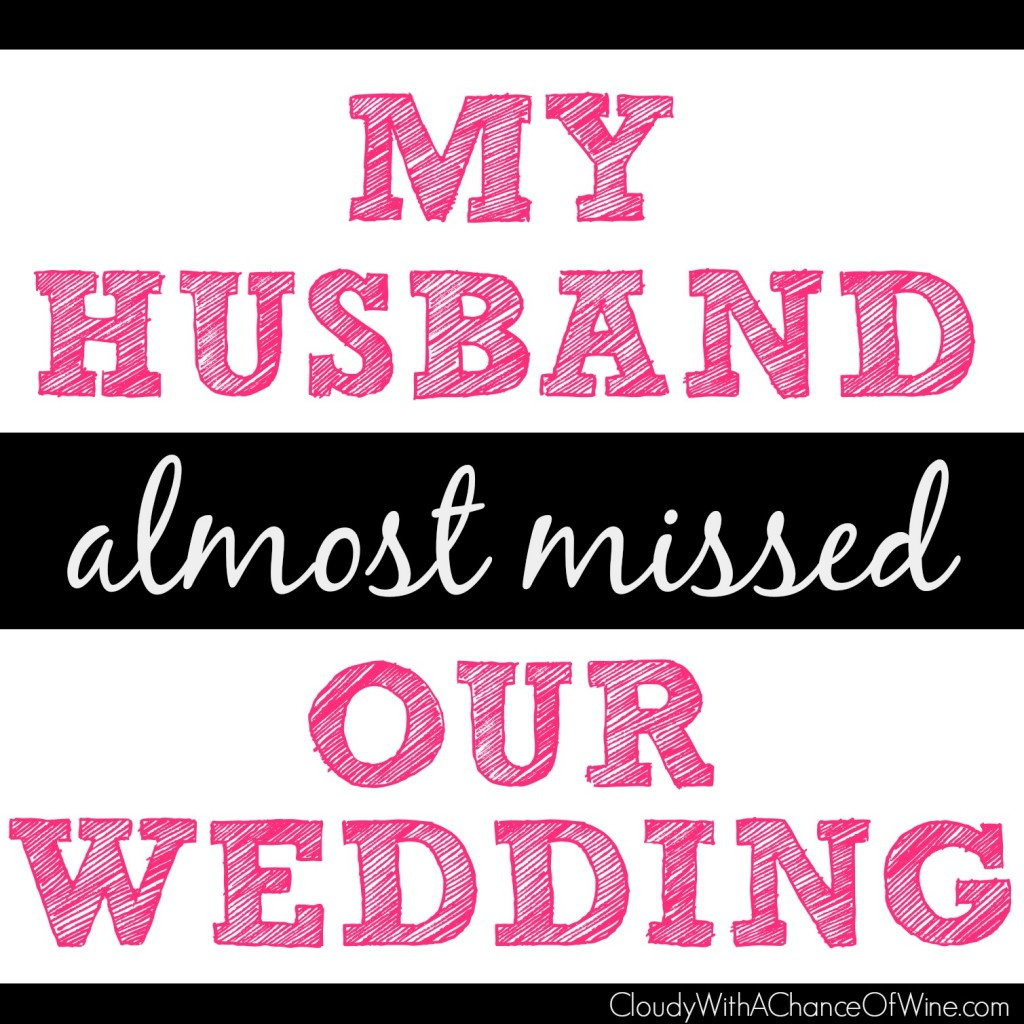 Tomorrow marks 6 years since our wedding, and I've been trying to think of a way to mark our anniversary on my blog.

I considered writing a nice letter to my husband as a surprise, but he only reads my blog posts if I force him to, which kind of defeats the point.

I thought about posting one of our wedding pictures so you could finally see what I look like, but my husband is convinced all bloggers are serial killers, so he made me sign an NDA when I started sharing embarrassing details about my life on the internet.

I kicked around the idea of giving you a blow-by-blow of our wedding day, but my stats have been crappy enough this summer that I decided I couldn't risk boring you guys with how gorgeous and perfect our wedding really was.

I even contemplated the idea of sharing some of our secrets to keeping the magic alive in our marriage, but I'm still too paranoid my mother-in-law will find my blog that I just couldn't bring myself to do it.

But then I remembered my husband almost didn't make it to our wedding, and realized I had something good to share with you all along.

My husband and I worked on the same floor of the same office building for 3 years before we went out on our first date, but it's not because he didn't have the balls to ask me out.

Quite the contrary, actually.

He made it a point to see if I was single almost ever time we bumped into one another, but I was stuck in one of those relationships that just. would. not. end.

But then one day, my husband saw me begging a fast food vendor to add more feta cheese to my salad, and came over to say hello.

We went out for drinks the very next night, and 7 months later, on my 30th birthday, I was staring at him in disbelief as he got down on one knee and proposed to me.

Did he have any idea what he was getting himself into?!

Neither of us wanted a long engagement, so we decided to get married that summer, leaving me less than 6 months to plan a wedding.

I'd say "us", but we all know I planned that wedding alone.

About a month before the big day, we were blissfully cleaning up our dinner dishes (read: breaking down cardboard take-out containers) when my husband's cell phone rang.

It was Sean – one of his old college buddies.

And as the conversation unfolded, it became quite apparent Sean had no idea I existed:

Hubs: You're still with Sarah?! How long has it been?

Hubs: I know! We started dating last summer. But you know what they say: when you know, you know.

Hubs: September 2nd. We're having a small ceremony with close family and then flying to Mexico for a week.

When he (finally) hung up the phone, filled me in on who Sean was, and told me a bunch of funny stories about all of the trouble they got into together in college, I decided I was going to take a shower.

And as I was walking to the bathroom, I turned around and said, "By the way? Our wedding is August 31st. I hope you can make it."

Fingers crossed he remembers it's our anniversary tomorrow.

If he doesn't, I'll be subscribing him to my blog so he never forgets again.

Happy anniversary, my love. I've made a lot of mistakes in my life, but saying "I do" to you was the best decision I ever made. xoxo