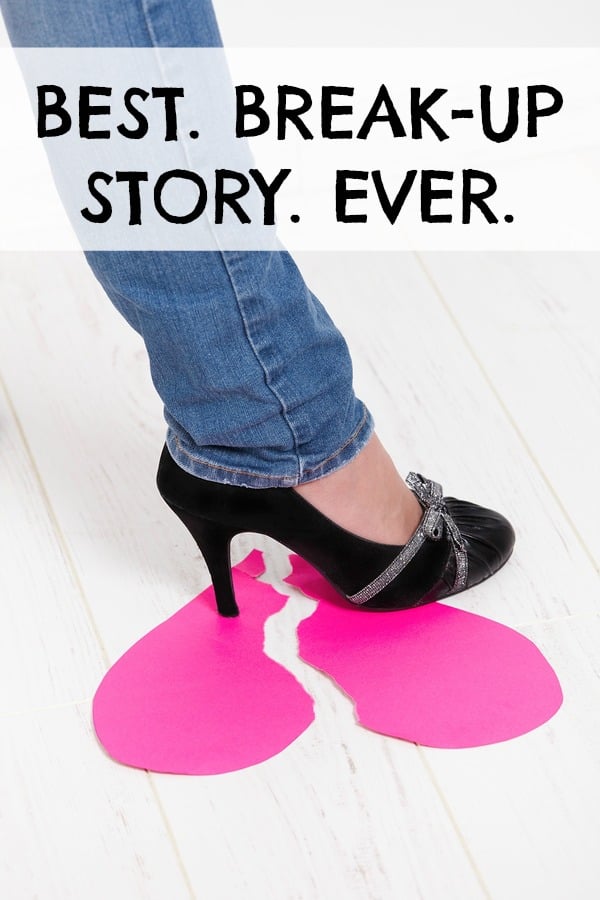 Do you have any good break-up stories?

Not as many as you'd think though. In fact, after sitting here staring at my computer screen for the last 20 minutes, I can only think of one good break-up story to tell you.

Okay, that's a lie, but I only have time to write about one break-up story tonight.

I had just graduated from high school and moved halfway across the world from my family, and my high school "sweetheart" decided he wanted to call it quits.

And I was devastated.

The only problem was that, while I was busy applying myself and figuring out what I wanted to do with my life, Douche Rocket had gotten himself involved with the wrong crowd, and he wasn't such a nice person anymore.

Especially when it came to me.

Of course, being the nice, monogamous girl that I am, I stuck by him. But after a particularly grueling fight a few years later, I finally snapped. I remember thinking how horrified I would feel if my own daughter was living with a guy that treated her as horribly as I had been treated, and it was in that moment that I decided enough was enough. I needed to move on. So while he spent a week pretending I didn't exist, I spent my evenings searching for a new place to live. And when he finally decided I was worthy of his attention again, I dropped a bomb on him: I would be moving out the following weekend.

The following week was awkward and scary as we tried to co-exist, and I felt a wave of relief wash over me when moving day finally arrived.

When I got home from work that day, I was shocked to find Douche Rocket waiting for me. I had naïvely assumed he would stay out of my way as I moved my belongings to my new apartment, but he made sure to take the time off of work to ensure I didn't take any of his stuff.

When the movers had piled all of my crap into their truck and were on their way to my new place, Douche Rocket and I agreed we'd grab our cars and meet at the front of the building so I could give him my keys…before walking out of his life forever.

Now, one thing you must know about Douche Rocket is that he loved nothing more than his souped-up Honda Civic. He poured hours of his life into that thing, and it always drove me bananas. I just found the HONDA RACING decal and the sports pads on the seat belts to be too much for a car that had a 140 horse power, you know? Add his erratic driving and need to shift gears like he was a Formula One driver, and I was embarrassed to be out in public with him.

Anyway, when I got to our meeting point, the most obnoxious electronica music was BLARING from his car. He'd always been one to crank the volume, but this was ridiculous.

When I asked about the deafening tunes, he rolled his eyes, opened the trunk, and showed me the new sound system he had purchased that week. Unimpressed, I told him he might want to turn it down before he burst an ear drum, and then tossed my keys at him before returning to my own car.

Enraged, he waved his fits and yelled something obscene at me.

And then do you know what happened?

The bass on his stereo reached a volume that was too high for his little Honda to handle, and since he hadn't put the car into first gear when he parked, it started to move forward.

And we were on an incline.

I'll never forget the feeling of satisfaction I experienced as I watched that D-bag run after his car as I gave him a honk and wave as I drove off to start my new life.

Which has been pretty fantastic, by the way.