Why I’m Not Allowed To Eat S’mores 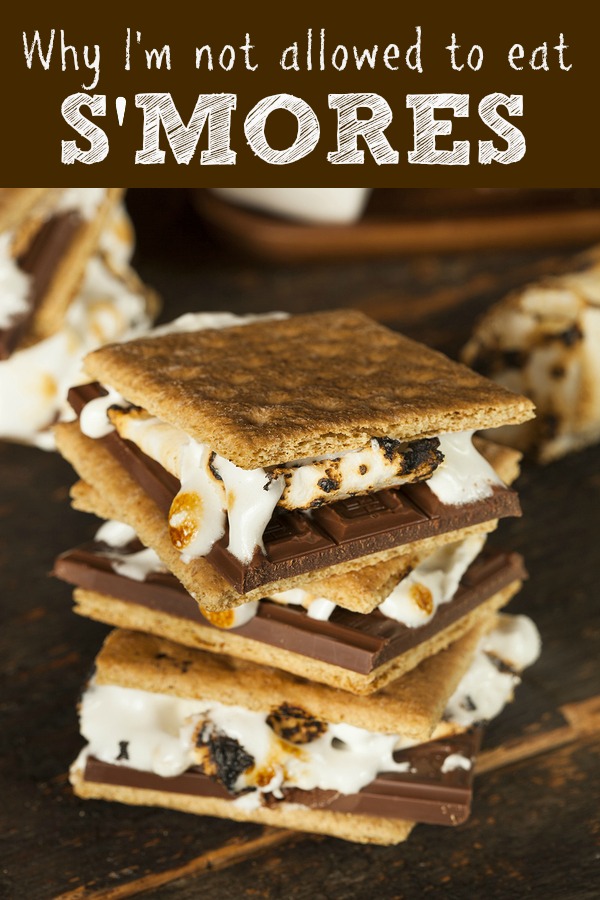 We went to a barbeque a few weekends ago and, apart from the post-wine bloat I felt for days afterwards, we had an amazing time.

But like all good things, it couldn't last forever, so once we'd had our fill of burgers, dogs, and potato salad, we shoved a couple of chocolate chip cookies in our mouths, buckled our 2-year-old in her car seat, and peeled out of there just in time to avoid an early-afternoon meltdown.

As we were driving home, Dishwalla's "Counting Blue Cars" came on the radio, and we rode in complete silence for a few moments as the memories of our youth came flooding back to us and we remembered a time when our biggest worries revolved around who's parents were out of town and how to get our paws on a case of beer.

Tell me all your thoughts on God?
‘Cause I would really like to meet her.

I love those moments, when we temporarily forget all of the stresses in our lives and offer each other a glimpse of the people we once were. Of course, our memories are extremely different. My husband often recalls beach volleyball tournaments, epic house parties, and guys' weekends in Cancun, while I'm often left reminiscing about drunken sailors, squat toilets, and my brief stint as a hooker.

But last Saturday was different.

I finally had a G-Rated memory to share with my husband.

And now I'm going to share it with you.

I couldn't have been more than 20-years-old when my then-boyfriend (whom I will affectionately refer to as "Douche Rocket") decided to take me on a road trip to his hometown. We'd been dating on and off since 11th grade, and had always intended on making the trip since returning to the US after graduation, but life got in the way and we never got around to it.

Anyway, the game plan was to get there around noon, have lunch with a bunch of his neighborhood buddies, and then go to his friend Eric's house for a barbeque before we crashed and headed home early the next day.

The day got off to a good start. The sun was shining, there was virtually no traffic on the highway, his friends were relatively nice, and I was never without a drink in my hand.

But then Douche Rocket suggested we start a bonfire.

The rest of the crew thought this was a fabulous idea, but since I'd spent the greater part of the day knocking back cheap wine coolers under the scorching sun, I wanted nothing more than to pass out.

But as soon as I covered my right eye so I could focus my vision long enough to find my way inside (am I the only one who has to do this when she drinks?), one of the other girls materialized with the makings for s'mores.

And I'd never had a s'more before.

So I grabbed another Bartles and Jaymes and sat myself back down.

About an hour later, when everyone else was just as desperate to pass out as I was, Douche Rocket had another brilliant idea: he and Eric would pick up the log from the bonfire, move it somewhere else, and then no one would have to stay up to wait for it to cool down.

Because THAT'S a good idea when you're 3 sheets to the wind.

So someone found a couple of sets of barbeque tongs and the 2 of them set to work.

When they finally picked the log up, they hurriedly started moving in my direction, threatening to drop the thing on my toes.

So I took a gigantic step backwards.

And then another one after that.

And before I knew it, I had stepped right into the pond located in the middle of Eric's backyard.

Panicked, I grabbed ahold of a nearby picnic table, but since the thing wasn't bolted to the ground, it came right into the pond with me.

So there I was, treading water in a pond in the middle of the night while a dozen of those huge, ugly goldfish swam around my neck and a picnic table rested against my forehead.

And all my high school sweetheart could do was laugh at me while his best friend Eric pulled me to safely.

And what did we learn on that beautiful Summer day?

Never offer to make me s'mores.

Or let me drink Bartles and Jaymes.